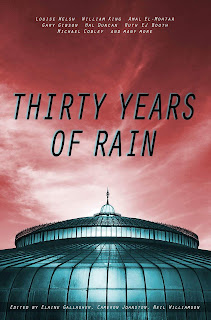 Did you know that the Glasgow Science Fiction Writers Circle was started thirty years ago? Well now you do.
Off the back of a writing course run by Duncan Lunan a small group began to meet regularly to critique each other's work and encourage one and all to better and bolder things.
Also to go the pub, but that was a minor part.

Well, not the main part.

Well, not the only part.

OK, so mostly there was a lot of sitting in pubs talking about the state of  genre fiction, but also occasionally writing was worked on and eventually people got published. Very good people.

People such as Gary Gibson, Hal Duncan, Neil Williamson, William King, Michael Cobley amongst many others.

I first popped along in the mid-Nineties and spent a lot of time feeling hugely inadequeate, before running away to Englandshire and letting all that sort of thing lapse. But, on my return to Glasgow I took up the pen again and eventually returend to the circle, who have been nothing but encouraging as I show them my scribblings. Without their help I would never have had any of my stories published

To celebrate their milestone the Circle are bringing out an anthology with thirty stories by people who have been at the circle over the years. It's called Thirty Years of Rain (it is Glasgow based after all) and the glorious cover graces the top of the page.

I'll post links to it as they appear but there is a launch on the Saturday of Fantasycon in Scarborough this year (three o'clock on Saturday with Newcon if I remember rightly) and on the 30th of September at the Sauchiehall Street Waterstones in our own rainy Glasgow.

Do please come along, meet some of the brilliant people who are in the book and maybe even buy a copy. We'll probably go to the pub afterwards.

And yes, I am in it, with a wee short about refugees that, if you ever think my mind has slipped its moorings, this will only add to the evidence. It's silly.

By way of getting your imagination off on completely the wrong foot here is a Pulp-O-Mizer cover that is totally misleading about the story. 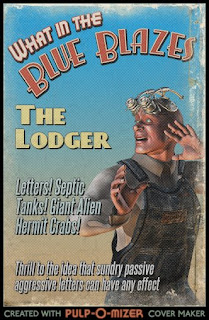 Brian M. Milton
Ooo, a new blog for to track my writing and no doubt other nonsense that crosses my mind.